This online article was published in February of 2021 by antifa λευkoşa, after the repression of the first march 'Os Dame' (That's Enough) by the police.

Yesterday, in the called demonstration “Enough”, [ως δαμέ] against state authoritarianism and corruption, for the health and freedom of locals and migrants, we took a step to break the fear imposed upon us. We salute the courage and resilience of the hundreds who disobeyed the ban on the demonstrations and took to the streets. The whole army of cops that rallied against us in Kolokasi Park (while earlier they forbade the arrival of Gate 9 at the pre-gathering point) and launched an unprovoked attack at the demonstration, managed to disperse neither the gathered crowds, nor our morale. Despite the arrests, the violence, the use of tear gas, pepper spray and water cannon, most of us managed to claim our stay at the spot. After endless provocations and minor clashes due to the attitude of the police, we proceeded to Eleftheria square and then to Makariou Street, where again after police attacks the crowd dispersed. The provocative cops chased people after the end of the march in the surrounding streets.

Yesterday’s repression was in no way cut off from the general policy of the state. State authoritarianism under the guise of the pandemic, the military management of the working class in detention centres, and the violence of the capitalist world are harmoniously expressed in the bats of the police. But as it turned out yesterday we are not the ones that are afraid. The cops were ordered to disperse the crowd, which was not easy for them. This order shows fear for the dimensions that demonstrations like yesterday’s can take, dimensions that they seem to take despite and due to the repression they are faced with. Despite the adverse conditions, around 600 people gathered in the park, while we estimate that there would be a much larger turnout if the police did not prevent the access to the gathering points. If our presence yesterday succeeded in something, it is that no one can pretend that repression has anything to do with our health.

Yesterday was a snapshot of two worlds in conflict. The world of authoritarianism, exploitation, fascism, and the world of solidarity, resistance, collective life. If the state and its cops think that yesterday they “won” because of their armed advantage, it is because they have no idea what they are up against. And they will never, ever, defeat what they cannot even comprehend. They can only remind us that when they cannot avoid this question, the only answer the state has to offer is repression. We are just the first drops. The storm is coming.

We stand legally, morally and politically next to the arrested and the injured: we are with you and we will deal with it collectively and all of us together.

SOLIDARITY TO THOSE ARRESTED & INJURED.

THERE IS NO HEALTH NOR LIFE WITHOUT FREEDOM – THE STRUGGLE CONTINUES 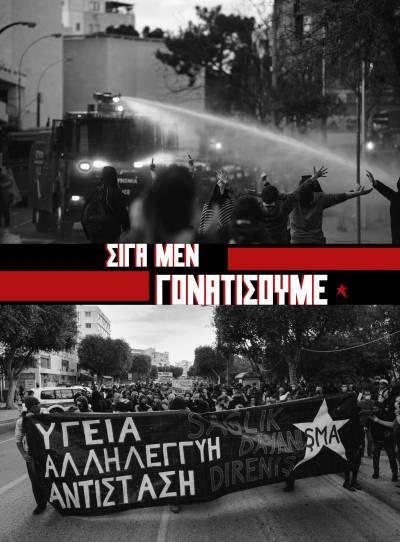