This translation was created for the purposes of archiving and does not originate from the original creators of the text.

(A simple and boring explanation for those who do not understand the self-evident).

From an anti-authoritarian point of view, the central problem is not the preservation of “national identity” or the “non-shrinkage of Hellenism” and similar nonsense. The issue is the IMMEDIATE and EXISTING oppression and authority – the green line, the presence of occupying armies (Turkish, Greek, English, Cypriot etc.) the danger of a new round of racist massacres (like those of '58, '63, '67, '74), of wars, of refugees etc. And since the problem is not merely the result of foreign interventions, conspiracies, etc. but also of the contradictions of this society (from which, after all, Georgatzis, Sampson, EOKA B and TMT came out), the struggle against the authority of the invaders and of states cannot be separated from the struggle internal to our society, against our own authority.

There are, of course, the voices of realistic logic: “through the national (problem) we will also solve social problems”. But if the national problem was born from this society, how will it be solved without addressing the roots of the phenomenon? A signature from politicians will not erase the 30 years of mistrust, economic inequality, chauvinism and blood that separate the two communities. Nor will it limit the expansionism of the Greek and Turkish states. Unless, of course, some people dream of a solution where one of the two communities disappears… These people exist too… Let them take become refugees on their own initiative, there is no need to repeat '23 and '74 because some people want to play the role of the “nation's heroes”. The other view, that national mobilization will solve social problems is, at the very least, ridiculous, historically speaking. The experience of the Third World movements of the 1960s is recent… No “national struggle” has solved the internal problems of a society regarding authority – not even the socialist ones… On the contrary, national struggles, when taken as fundamental, primarily strengthen the state, oppress minorities, create a militarist fanaticism within society… Maoists (current and former), look at your accomplishments… What other than dictatorships and Khomeini did the famous “national liberation” movements leave in the Third World?

But we do not have to look much further… Look at how the ideology of the national problem as the fundamental issue, has worked in Cyprus… For “anti-imperialist unity” AKEL has become the firefighter of social movements, EDEK has become a chauvinist party, and a pro-Enosis Marxist once said the infamous “if you don’t take a stand on the national issue, you have no reason to exist”, to an initiative for the formation of a women’s group.

THE CYPRUS PROBLEM IS WILL TAKE YEARS CHILDREN… AND TO ESCAPE FROM TODAY’S DILEMMA BETWEEN A WAR OR A “SOLUTION” WHICH WILL CREATE THE SAME SHIT IN FIVE-TEN YEARS, IT IS NECESSARY TO ARTICULATE AN ALTERNATIVE DISCOURSE WHICH, THROUGH ITS ANTI-AUTHORITARIAN PRACTICE, WILL PUT THE PROBLEM IN A NEW FRAMEWORK.

THROUGH the present apathy a much more horrifying nationalism from that of the past (which will repeat itself in all its tragic-comic dimensions) will emerge, or a TRANSCENDENCE/OVERCOMING of the past and the present… THE FINAL INDIGESTION WILL BE YOURS… SO BEWARE FROM NOW HOW MUCH SALT YOU PUT. 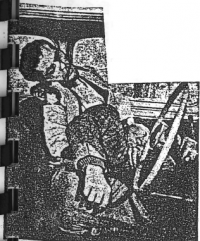 “I DO NOT CARE IF ON THIS EARTH LIVE TURKS OR GREEKS. WHAT HAS VALUE IS THAT THOSE WHO LIVE ON IT WATER IT WITH THEIR SWEAT AND WALK ON IT FREE…” KYRIAKOS MATSIS