This is an official translation as it was published by the original authors of the archived text.

This online article was published on 08/12/21 by the co-ordination group Os Dame (That's enough) on facebook, on the event calling for the fourth protest march of the group.

Each time the government announces measures to contain the spread of COVID-19, we hear about policing instead of investments in public health. While Cyprus stands at the EU average on vaccinations, the state comes back with new divisive measures, instead of securing access to healthcare for all. The government has transformed a measure of protection into a punishment tool, depriving social life from those unvaccinated.

The only thing the government achieves with these actions is to feed fascism and fundamentalism. This was evident in public schools over the last 10 days, with attacks against teachers, arsons against classrooms and planting of bombs. These phenomena, cultivated by the rift between the government and covid-deniers are extremely worrying. Both sides are part of the problem and the ongoing rift between them prevents social reaction to the authoritarian, far-right policy of the government.

Charging rapid-tests and reduced accessibility to testing sites, come as additional burdens to the increased cost of living, as inflation has reached 4.5%. Basic goods are subject to price hikes on a daily basis, something which obviously affects us, the working class, disproportionately. While prices are rising, wages are stagnant or are even reduced and working conditions are becoming increasingly flexible, oppressing and hard, as we saw recently in the fields of education and health.

While we are anxious on whether we will have enough money for rent and utility bills at the end of the month, oligarchs and politicians are exploiting our labour, are looting our common natural and cultural heritage, and continue filling their pockets in every possible way. The state machine and the corrupt elites are trying hard to avoid any possibility to be held into account for financial scandals and corruption, which has corroded social cohesion. The Pandora Papers, which included references to Nicos Anastasiades and his law firm, largely went under the radar.

Moreover, gendered violence is being normalised, as sexist comments and attacks in Parliament, as well as femicide and rape cases from clergymen, politicians, and othersare also characterized by the same lack of accountability and justice for the victims. Additionally, there have been no prosecutions yet regarding the police brutality we faced on 13 February, despite the fact the independent watchdog handed its report to the Attorney General months ago.

In a bid to distract from these huge problems and its incompetence and lack of will to deal with them, the government deployed xenophobia and racism once again, targeting migrants and calling a “state of emergency”, citing statistics that are completely false. It is quite likely, that the numbers presented recently by the Interior Minister include beneficiaries of the golden passports scheme.

The refugee crisis is also instrumentalised on the Cyprus issue front, as the government claims that Turkey is sending refugees here in a bid to alter the demographics. The fact that certain people are benefitting from trafficking and that others on island are exploiting these vulnerable individuals as cheap labour, rarely makes the headlines.

Citing efforts to tackle refugee flows towards Cyprus, the state does everything it can to turn the Green Line into a hard border. The failed fence in Astromeritis has been extended to other areas close to the Buffer Zone, while steel gates have been installed at the Ledra/Lokmaci crossing. Meanwhile, the establishment is also setting up a publicity stunt, to put responsibility for the permanent partition that's coming anywhere else but on Anastasiades. At the same time, the fenced-off city of Famagusta, the only aspect of the Cyprus issue which Greek Cypriots felt was bound to return under their administration, is slowly going.

The lack of will for cooperation between the leaderships south and north of the divide was more than clear during both the lethal megafires in July as well as during the oil slick in Karpasia in August. It was always obvious that the environment was never a priority for the state. And even if they are promising regional initiatives to protect it, the truth is that local elites see our natural heritage as another means to make money. That's the only explanation behind loopholes for “development” in the government's plans for the Akamas Peninsula and the blind eye turned for a real-estate project in Platres.

All of the above constitute a dystopian scene and we must react. On 18 December we once more shout “Os Dame/Enough” and demand:

👉An end to the ongoing management of the pandemic in terms of repression rather than care. Real investments in free public healthcare for all, locals and migrants alike.

👉Health without exclusions. Free and facilitated access to vaccines and rapid tests without any conditions or charges.

👉An end to the exclusion of people according to vaccination status from sites of everyday needs and recreation.

👉An end to the war against migrants: To shut down all concentration camps. Immediate and fair examination of all asylum applications, dignified living and labor conditions for all.

👉An end to the partitionist politics and Nouris’ policies behind which hide corruption and economic deprivation of the island. Removal of the barbed wires placed by the Ministry of Interior on the Buffer Zone, as well as the iron fence door at the Ledras/Lokmaci crossing. We demand a reunified federal Cyprus.

👉An end to the plundering of the natural and cultural heritage of the island.

👉An end to the ban on demonstrations.

✊To continue resisting against authoritarianism and the capitalist barbarity. To move on creating paths where they don’t exist.

📢 As always, we invite everyone attending the mobilization to wear masks and maintain distances. Religious and nationalist symbols remain unwanted in our demonstrations. 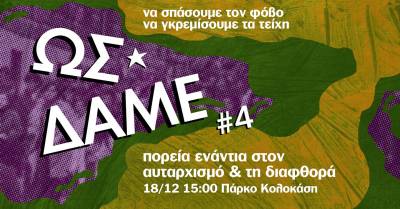