This online article was published in April of 2021 by antifa λευkoşa.

NO NATION UNITES US – NO BARBED WIRE KEEPS US APART

On 24/4 we take to the streets together with our t/c comrades against partition. Against nationalism, racism, authoritarianism. For us, partition politics are connected to the handling of migrants, treating the green line as a border with barbed wires, the geopolitical aspirations of the EEZ and the investment programmes. Partition politics are also connected to the class reality: the victory of nationalism in Cyprus comes with the historical crushing of the working class, the social and class struggles.

The collapse of the talks in 2017 can be read through the material, geopolitical conditions that came with it: the search for gas in the EEZ that was not going well and the massive project of the investment programme and the passports. It can be read then, as a strategic choice of capital based on its immediate interests. The same can be said about the checkpoints, whose closure satisfies important parts of greekcypriot capital. We don’t mean to say that the government in the south is planning coldly and mathematically its external policy, however it is clear that nationalism supports and is supported by capital’s material interests.

Today, partition politics are not moving in a void. They go together with harsh restrictions, militarisation of our everyday life with cops and army to survey us, repression against migrants and protestors and war propaganda through the government and the media. The struggle against partition then is connected to the struggles of the past months against authoritarianism and corruption.

After the blow to the prospects for federation in 2017, there is a need to find new ways, new words to speak about the Cypriot issue, at least south of the green line. We take as a starting point the struggles and the socialising of the last months, the communities that exist and act antagonistically to the confinement, loneliness and nationalism that is imposed on us. We have neither time nor desire to beg the nation’s fathers to figure it out and save us. Our task is the creation of an antagonistic reality, multi-faceted communities of struggle that question in practice the new realisms of the state and the media. Together with the Turkish Cypriots. Together with migrants.

On Saturday we take a step. The road in front of us is long: we begin by connecting it. 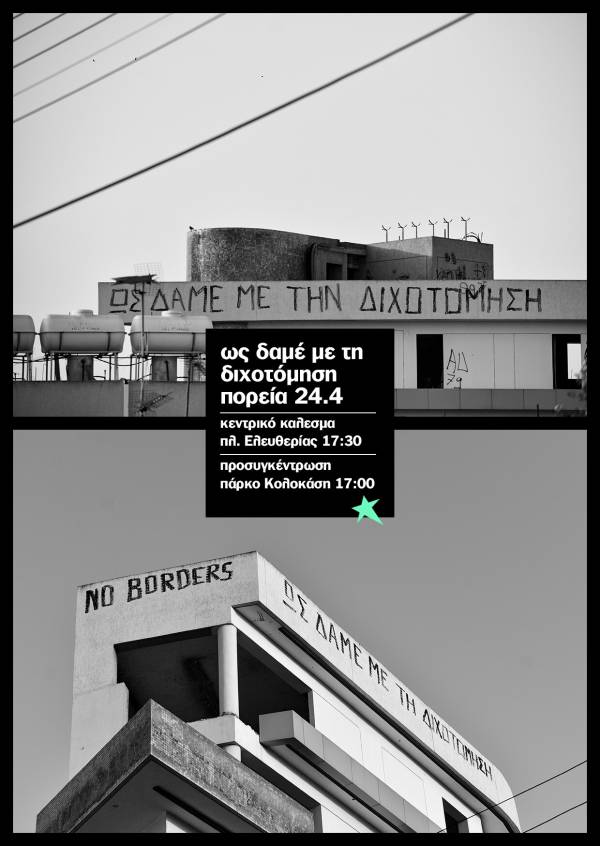