This online article was published in March of 2021 by the co-ordination group Os Dame (That's enough), on the facebook event calling for the third protest march of the group.

Social outrage against state authoritarianism, police repression, government corruption, divisionist and racist policies and the failed management of the pandemic has not died down. So we are taking to the streets again!

One month after the massive march of 20th February and the de facto cancelling of the decree banning demonstrations we are still in a condition of restrictions on our individual and collective freedoms.

We are also seeing steps to consolidate partition and racism, by placing barbed wire at the green line of Astromeritis, supposedly to prevent refugees from crossing, at a time when we are preparing for a return to negotiations for the solution of the Cypriot problem.

Furthermore, we are watching as patriarchal violence unfolds in front of us with endless allegations of sexual harassment by people in positions of power, while the revelations of how the members of the Cypriot gang are profiting from our natural and cultural heritage continue.

On Saturday 27th March we call again to a march demanding:

We also assure that we will support the 11 arrestees and the injured of the 13th of February in their legal battle against the state. For this, we call all those in solidarity to contribute to the fund we have set up for legal, medical, and organisational expenses.

On the 20th of February we proved that we are thousands and that we have the strength and desire to continue to fight collectively against the police brutality that we experienced on 13/2. Once again our demonstration will have a peaceful character and we will see to its safeguarding.

We call organisations, collectives and groups to co-sign and march with us. We wear masks and keep distances. We stress, once again, that our mobilisations have a clear antifascist and class character and as such nationalist and religious symbols and slogans are not welcome.

On the 27th, once again, we take to the streets to break the fear! To resist against the looting of social wealth and the environment. To resist against authoritarianism and capitalist barbarity. To open paths where they do not exist. 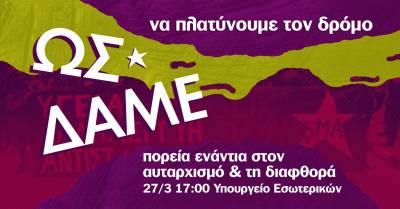