When the Drops Become a Storm (Online Article)

This online article was published in February of 2021 by antifa λευkoşa, after the second march 'Os Dame' (That's Enough).

WHEN THE DROPS BECOME A STORM

We said that the march of last Saturday was a snapshot of two worlds in conflict: the world of authoritarianism, exploitation, fascism, and the world of solidarity, resistance, collective live. Yesterdays’s march was a victory celebration of the world that “lost” at Kolokasi Park the first time. The heterogeneous crowd consolidates the movement’s and wider social capacity against state authoritarianism and capitalist barbarity, but also the social, ideological and political confusion of our days. Inflatable ducks to face the water cannon, antiracist, antifascist, pro-reunification, revolutionary, reformist and whatever you can imagine in slogans, banners and placards, safety goggles perched on heads, Maalox in bags and helmets in hand, masked people dancing, a purple dinosaur in the front, the defence teams of the black and the green block saying hello with fist bumps.

Yesterday we demonstrated, us and our people, our world. Out world, not as an aggregate of persons, as a mass, but as another, parallel reality, as relationships, ideas, suggestions and critiques. As the real movement that abolishes the present state of things: a truly varied, complex mosaic of refusal against the situation we are experiencing. But if we want to speak about people as mass, as number: we were 10 fucking thousands!

Yesterday’s march threw the ban on demonstrations where it deserves: in the dustbin of history. If the appearance of covid-19 and the prohibitions that came with it initially seemed to mark a pause in social and class struggles under the boot of the state of emergency, it has become clear that there is no way we will allow the political handling of the virus and the capitalist crisis to crush us. Yesterday’s demonstration was a defence and a question at the same time. A defence of the relationships, the demands, the parallel world that the state and its cops attacked last Saturday. A question on where this parallel world can go, on its limits, on its organisational and theoretical future. The only certainty is that nothing is over…

There is no life and health without resistance and freedom.

See you in our streets.

See you in the struggles.

P.S. Thanks to all the people that stood with us in the streets on both Saturdays, but also to all those who sent solidarity messages and showed interest in organising and networking with us. We will make sure the buzz of contacts and relationships that is built in these struggles is not lost – we will see you soon. 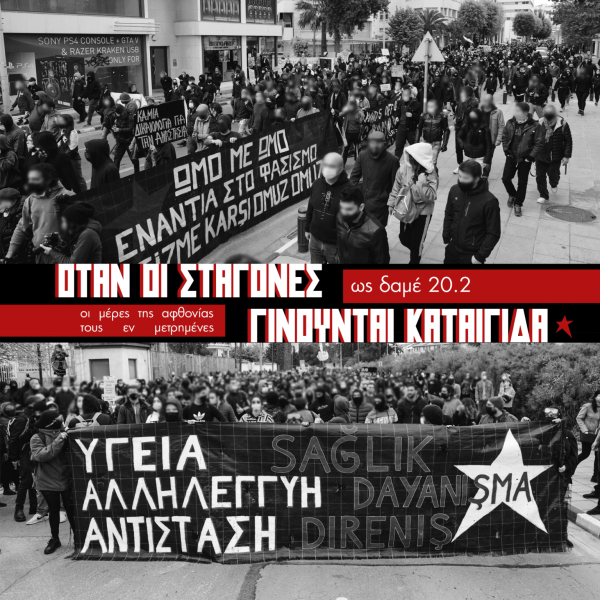