You are here: start » Cyprus Movements Archive » digital » multiple » Collective announcement in response to the minister of interior's statement on the solidarity demonstration at the Pournara detention center (Online Article)

This online article was published in May of 2020 on Facebook by the groups AERIKO in the mountains of Troodos, antifa λευkoşa, Antifa Aradippou, Antifa Oroklini, Dromos Antifascist Collective, Bandiera, Spirithkia andSyspirosi Atakton.

The statement by the ministry of interior about the recent (24.05.20) non-confrontational demonstration of solidarity at the Pournara detention center is troubling. It is part of an attempt to delegitimise and target any form of political critique that resists the state's plans. We remember the attack by the state and the media against demonstrators at the Ledra checkpoint a few months ago and the order to deploy soldiers against them. The internal threat that the government has chosen this time is that of migrants.

The voices of the detainees that for weeks have been protesting the awful living conditions and their continued confinement despite the lifing of movement restrictions are not even taken into account by the media, that choose to regurgitate the government's statements. The violence of the ministry's “great efforts” and blackmail as a means to “intensify the returns to countries of origins” are revealed in a video released on social media, where detainees are informed that the only alternative to a prolonged confinement is the statement for “voluntary return”. In another video, filmed within the center last Sunday, migrant detainees report that they were arrested either in their places of residence, or from the street, and transported to Pournara without even being allowed to bring other clothes or personal items, with misleading “explanations” by the police that in some cases said that it was only a temporary measure until the validity of their housing contracts was checked. As far as the claims about respecting human rights go, the almost daily violent police repression of peaceful protests by the migrants within the camp seems to indicate the exact opposite.

It is clear that the last few months the state has used every opportunity to intensify its attack against migrants, using the coronavirus crisis to create a feeling of national unity against visible and invisible enemies, proceeding with plans for a new migratory policy with closed detention centres and more deportations. It is clear also that the state is putting on its authoritarian mask in an attempt to recoordinate internally and draw political value from the flock of the far-right. Against the state of exception and the emergency prisons like Pournara, we continue to stand with migrants, supporting their struggles and demands.

IMMEDIATE RELEASE OF THE DETAINEES AT POURNARA

AERIKO in the mountains of Troodos 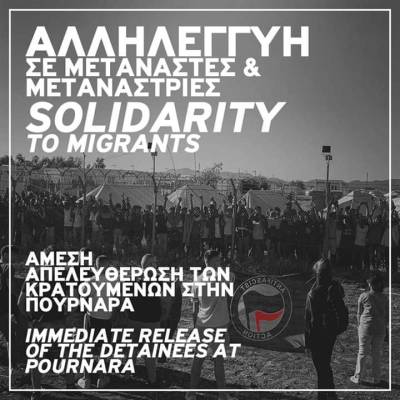