Server under migration to new hosting provider. Everything should work normally. Report errors by email.

Archive Regarding Fascist, Racist, Xenophobic and Migrant/Refugee Exploitation in the Republic of Cyprus (1993-2020 - 7th Edition)

The following link contains a PDF file we received archiving incidents of Fascist, Racist, Xenophobic and Migrant/Refugee Exploitation in the Republic of Cyprus in the period 1993-2020 from various sources.

5 English Texts from the Archive

In our attempt to make the archive more accessible, we present here 5 key texts of the broader Cypriot radical political scene that are available in English on the archive. Part of the archiving project is making previously unavailable texts; available to new audiences. Many of the following texts have thus been translated through the initiate of various individuals, whose work has been fundamental in allowing us to share these key texts for the first time, in English. A bonus text has also been added at the end of the list.

This ecological text circulated in the Chrysallida social space in Limassol, in relation to developments surrounding Akamas. It consisted of 9.5 pages and included extensive excerpts from various works by Max Horkheimer, Karl Marx, Peter Kropotkin, Murray Bookchin, Ivan Illich, et al. It is one of the few ecological theoretical texts of the Cypriot anti-authoritarian scene.

Published originally in the 35th issue of the Nicosian magazine ‘Within the Walls’, this text by Costis Ahniotis has remained a classic exposition of the Cyprocentric position associated with the extra-parliamentary left.

This book was published by the leftist group Workers’ Democracy. It is perhaps the most extensive Marxist analysis of the Cyprus Problem, founded upon the theoretical framework of revolutionary deafeatism. While the book still remains untranslated as a whole, a recent partial translation of key parts has emerged in 2019.

This text presents the analysis and position of the libertarian group Falies surrounding the Cyprus Problem and the approach that should be taken by the extra-parliamentary left.

This brochure was published by the group antifa λευkoşa, and analyses the immigration policy of the Republic of Cyprus during the recent years, emphasizing the effect on refugees and the process of illegalization of migrants and refugees.

This text was published in the 10th issue of the anarchist magazine ‘Traino stin Poli’, in Limassol. Published on the pretext of elections contra the then possibility of the resolution of the Cyprus Problem through the Ghali set of Ideas, it offered a direct justification for supporting a bi-communal federation. 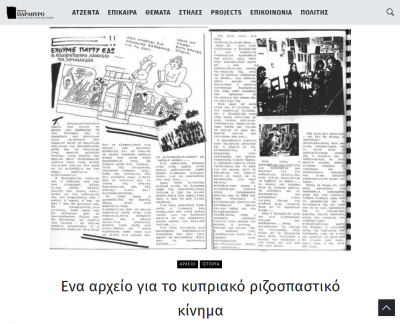 In the Sunday (07/06/2020) edition of Politis' cultural section “Parathyro” (Window), you can find an interview (here, in Greek) with two of the editors of the Cyprus Movements Archive. In the interview titled “An archive for the Cypriot radical movement”, we discuss the beginnings and first steps of the Archive four years ago, we present currently uploaded material, and explore the ways in which the Archive can be improved as we move forward.

We thank Meropi Moiseos, Culture reporter for Politis, for the invitation and the opportunity to make the Archive known to a wider audience.

There are many ways in which you can contribute to the Archive, such as providing scanned material, typing and translating existing material, and help frame the material in its historical context by writing short historical notes. We welcome your communication at arxeio@riseup.net.

Expanding our Project: Archiving of Websites

The Movements Archive has now expanded its project, including now websites and digital entries as part of its archiving efforts. Over the years we have come to the conclusion that often, digital entries are lost more easily than printed material, due to broken links, sites going offline and hosting sites, like geocities, closing down. We have of course used the Wayback Machine of the Internet Archive, both for archiving the websites of various groups, as well as locating and retrieving websites that have gone offline. Our expansion now however shifts our efforts towards preserving, at least partially, important online articles on our website, while also including websites as part of our archiving process.

As part of this process we have already created pages for the websites Platforma News, 3533, Island Anarchy and Kontrasusta on the Greek version of the site, while Reunification 2011 is available to both the Greek and English version. Articles have been added to Kontrasusta, Reunification 2011 and Diogenis’ Lantern/Φανάρι του Διογένη.

Το ακόλουθο υλικό έχει προσθεθεί στο Αρχείο - The Following Documents have been added to the Archive (in the Greek language section):

In 1988 the Committee for the Support of Conscientious Objector Giannis Parpas was formed, after the imprisonment of the first Conscientious Objector in the Republic of Cyprus. The archive has by now located, as well as typed various material (that is now in need of translation as it is only available in Greek).

1) For a general documentation of the formation of the committee look at 'A Conscientious Objector - The end of the Long Struggle (Ένας Αρνητής Στράτευσης - Το Τέλος του Μακροχρόνιου Αγώνα)'.

2) For the material of the Committee check its page on the archive.

4) For the ideological tensions which developed check the first text alongside the text 'On the Theoretical Farts of D. Mihail in Socialist Expression (Για τις Θεωρητικές Κλανιές του Δ. Μιχαήλ στη Σοσ. Έκφραση)'.

The Archive now has a facebook page, to be found at https://www.facebook.com/movementsarchive.

The page will be used mainly to make the archive more widely available and will not replace the archive itself, nor will be the carrier of original content. Important updates will continue to be firstly published on the current blog.